Grocery shopping: US vs. UK 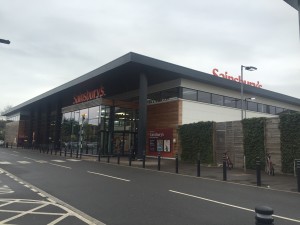 The overwhelming winner from Friday’s poll was to hear about differences in grocery shopping, so here are my observation based on my favorite daily grocery store in the US (Publix), and my current local grocery store (Sainsbury’s). Grocery shopping is not one of my favorite pastimes, but it’s necessary, so I go when I must. I’ve noticed this has changed a lot since moving to England. In the US, I would usually do one big grocery shop a week, and that was it. In the UK, I go a lot more often, usually two to three times a week. I have to; most meats have sell by dates only a couple of days in the future. Plus, our refrigerator is quite small, so there’s not room to stock up on a lot of goods, and my pantry is just a small kitchen cupboard. The good news is the local grocery store is less than half a mile away, and it’s easy to walk or drive to.

So what are the big differences between the US and UK? I mean, a grocery store is a grocery store. However, there are some things about UK grocery stores that I find odd/different from my prior experiences.

These are the main differences I noticed on my everyday shops. Another difference however, is the lack of speciality grocery stores. In the US, there are a lot of specialty grocery stores that focus on more upmarket products or organic foods like Trader Joes, Sprouts, Whole Foods Market, and Fresh Market. I haven’t seen anything like this in the UK. However, there are a couple of Whole Foods Markets in London. I’ll have to go visit one and see if it’s anything like the US stores. Watch the slide show below to see a few more differences in photos, and don’t forget the next post will be on Wednesday.

« The teacher job hunt: US vs UK » Throughout the year: comparing US and UK school schedules