Day by day: Comparing US and UK school schedules

In the previous post, I shared some differences in the yearly school schedules.Today, I want to compare what I’ve experienced schedule wise in the US versus UK on a daily basis.

One of the big differences is that in the US we refer to the school schedule, our daily schedule, students have schedules, etc. We like the word schedule. In the UK, everything is referred to as a timetable. In a sense, they are the same thing. However, a student’s timetable in the UK is much more complex (that’s the case for teachers, too).

Firstly, I taught for ten years in the US, and we tweaked the daily schedule in major or minor ways every year. There were also some significant differences between middle and high school. In middle school, students took four academic classes (math, science, language arts, and social studies) every day and two connections classes. Our discussion on the middle school schedule included things like length academic classes vs. connections classes, lunch times, who had connections at which time of time (sixth, seventh, and eighth grade students stayed together for connections, and the length of time for homeroom. Ultimately in middle school, students took four academic classes every day along with the two connections. The schedule for a particular student would stay basically the same throughout the year with a rotation of connections classes each nine weeks. Academic teachers would have planning periods while the students were at connections. This meant that all grade level academic teachers had planning at the same time allowing for meetings to take and planning to take place. Most recently for me, academic classes were 70 minutes in length.

The two years I taught at high school were quite different from each other. The first year, we were on a traditional non-block schedule. Students had seven classes each day including four core academic classes and three electives. Classes were 55-minutes each, and there was an hour for lunch. Teachers had one 55-minute planning period per day.

The following year, we switched to an A/B block schedule. Students had eight classes total, attending four classes each day in addition to a 25-minute academy time for project work. Class periods were 85-minutes in length, lunch was 30 minutes, and teachers had one planning period each day. So as a teacher, I taught three longer classes each day. Although I am not there this year (obviously) I did help shape the schedule for this year, which is a tweak of the previous schedule. We still use an A/B block, but Monday students go to all classes for shorter periods of time. Students are back to taking 7 classes instead of 8, and there is a full block of academy time every B day (Wednesdays and Fridays). You can see what the schedule looks like for Mondays, A days, and B days below. 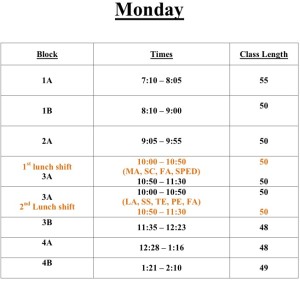 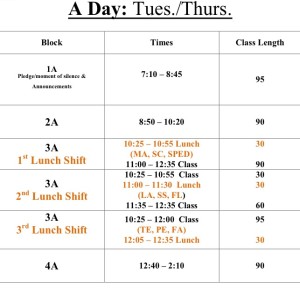 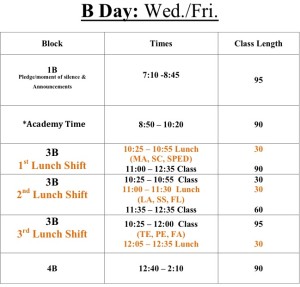 It might look confusing at first glance, but after a week or two, all students and teachers have their own personal schedule memorized. One interesting thing to note is that you see the same classes at the same time each day. This is pretty common in the US. It’s incredibly different in the UK as you’ll see below.

The basic schedule at my current school is the same each day. We start with 20 minutes of form/tutor time. This is similar to homeroom in the US. We then have 1st and 2nd periods followed by a 15 minute break. This 15 minute break is awesome. Teachers have duty one day each week, but the other days it is a break for students and teachers alike to grab a snack and a cuppa. (How very British!) We then have 3rd period. Fourth period is longer as it’s the lunch period, and it’s followed by 5th period, the last class of the day. There are review sessions for an hour after that, mainly for students in exam groups. It rotates by content area, and science does ours on Wednesdays. Otherwise, teachers often have meetings during this time period as the majority of students have gone home after 5th period.

Now here is where the big differences come in. Instead of a student’s schedule repeating daily or every other day, at my school now, a student’s schedule repeats every two weeks. It’s the same for the teachers. Students don’t have the same classes at the same time each day. Depending on the grade level, students have a different number of science classes over that two-week period (generally referred to as a fortnight).

One perk to this schedule is that I see a class group at different times of a day throughout the fortnight. It becomes really apparent how time of day affects learning and behavior. I have one class in particular that are really amazing when I have them period 1 or 2 and that are a complete handful period 4 or 5. If I only saw them in the afternoon, I might think they were all just poorly behaved. However, since I also see them in the mornings, I know a lot of it has to do with time of day (not that I’m excusing poor behavior, but I think all factors should be considered).

Here’s a glimpse of my current timetable noting weeks A and weeks B. When I initially received my schedule, I had to color code it in order to help me see what classes I had when. 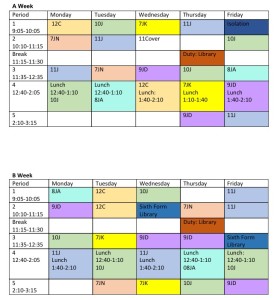 Since I’ve been teaching in England for less than a year, I’m not sure how a timetable/schedule like this evolved. From what I’ve seen, I believe other schools operate similar schedules. I also don’t yet know what my preference is between the US and UK. The only stand out is planning. I’ll talk about this more in another post, but planning one lesson to teach 4-5 times in the US system is much more efficient use of teacher time (in my opinion) than planning 4-5 different lessons to teach one day with no repeats. It also doesn’t allow for that perfecting of the lesson throughout the day that I used to love. There’s a lot more to share about differences in how lessons works, so I’ll save it for another post.

Finally, you might have noticed there was not a new post on Friday. My initial aim was to post every Monday, Wednesday, and Friday. I may have to rethink this schedule, as I find I’m quite exhausted on a Friday afternoon!

« Throughout the year: comparing US and UK school schedules » Weekend walks in the country