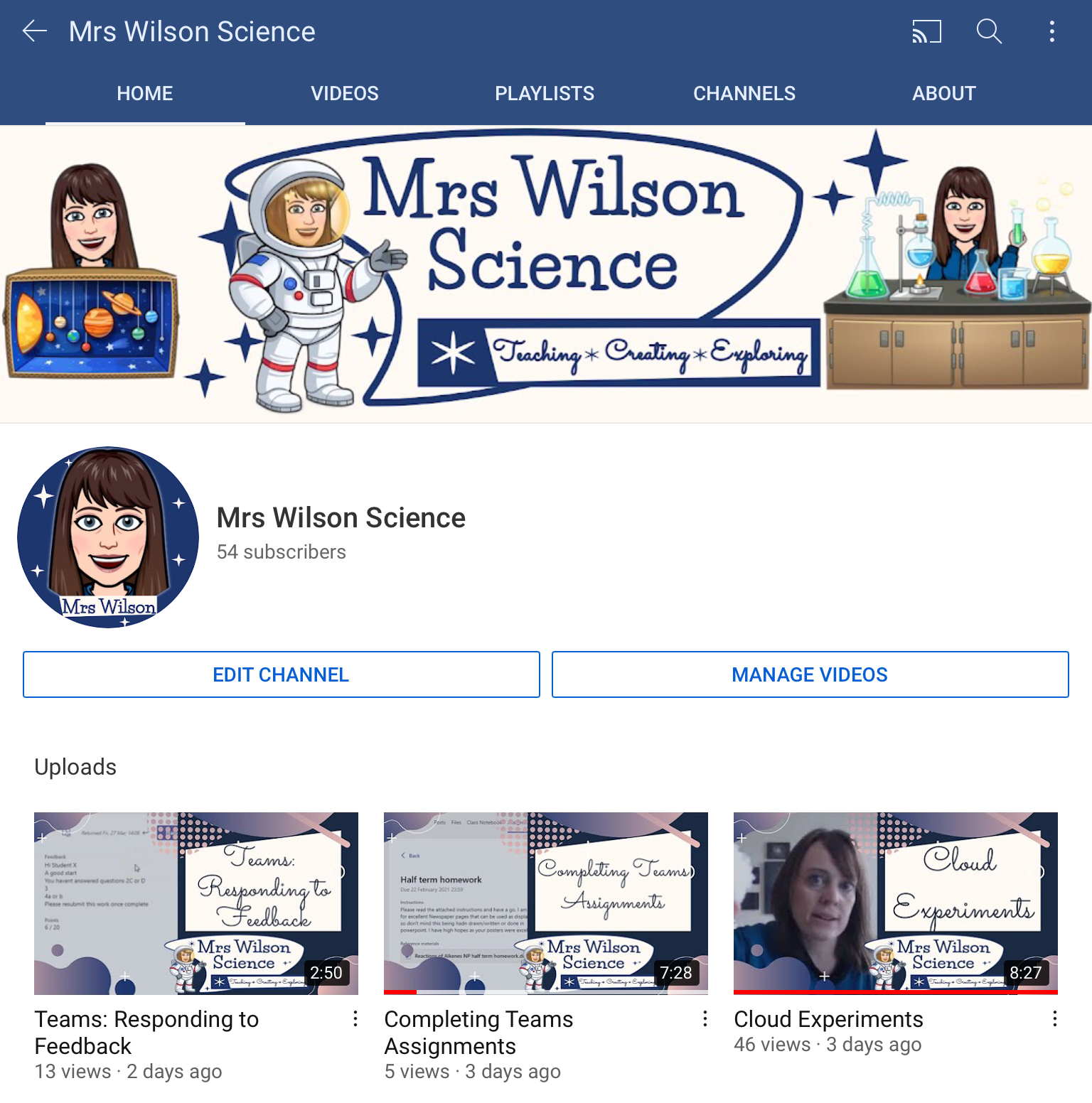 Last week we had our half term break, and I was able to work on really launching my YouTube channel. I updated the theme (and then matched it here on the blog), but the most exciting thing is of course new content. I have several videos that went live last week. A couple of them are easy science experiments, and there are several on using Teams from a student perspective.

I’ve been on a big push this past weekend to reach 100 subscribers. I’ve made it to 79 so far, and I’m just looking for 21 more people to subscribe to the channel. I would be so happy if you decided to subscribe and overjoyed if you passed on info about the channel to your friends. I would say may target audience are teachers and parents supporting their children. There will be lots of science experiments and explanations and tech videos as well – focused both on Microsoft how-tos and pedagogy.

Here’s a taste of what you can find on the channel. I hope to see you there!

This year I\’ve had two new roles at my school. The first one started in September (even though I interviewed and accepted the role last February), and the second one started in January of this year.

Our Head of Chemistry retired at the end of the 2019-2020 school year. I was super excited to be appointed to this role, and I made a lot of changes to how we organise and teach our A Level Chemistry course. I revamped our teaching calendar, our summer homework schedule, and planned a transitional period for our new year 12 students to prepare them for A Level studies after being out of school since basically March of last year.

Then in November, I had my biggest challenge in this new role: we were contacted by OCR to have our practical work monitored as part of a two year rolling cycle. This was a bit daunting – mostly because our students have not done that much practical work due to our COVID-19 restrictions. However, I was able to get everything together, we had a virtual monitoring visit, and all is well for the next two years. I also learned a lot during the process.

While all of this was happening, and since March of last year, I\’ve been supporting teachers and other staff at my school in online and blended learning – specifically focused on how best to use the technology tools. Well, that led to a new role being created, and I was the obvious choice. This led me to my new role.

Ambassador for Technology for Learning

I was a bit hesitant to accept this new role, as I had only been in my position as Head of Chemistry for a term, and this role would mean giving up that position. I was also a bit concerned about upward progression, which is much more clear in a head of subject role. The position was also listed as a fixed term contract, and I didn\’t want to move to a new role to only be in it for a year. I was afraid it would be a lateral move. I emailed my concerns on to the person responsible for supervising the role, and he passed it on to my principal. My principal called me to address all of my concerns, and I was blown away by this. So, needless to say, I applied for the role, interviewed, and was appointed.

This was a journey I wasn\’t exactly expecting this year. However, I was strategically placed when news of schools closed to most in person learning and lockdown 3.0 was announced. I\’ve been able to not only teach all of my classes live (via Teams) following my full timetable, but also help to rollout using OneNote Class Notebook with all classes across the school. I\’ve provided training for teachers, staff, parents, and students during the January term. I have also started attending our SLT meetings, giving me a much clearer glimpse into the inner workings of leadership at my school. I feel like I have a much more strategic position, and I am able to provide suggestions to improve our technology for learning.

And probably one of the coolest/nerdiest things is that I now have access to the Teams Admin console, so I can get a better idea of how our Teams settings are running in the background.

So even though my stint as Head of Chemistry might have been short, I feel like I did have a positive impact in the role. I also helped to interview my replacement, and I know the department is in excellent hands. As part of my role as Ambassador for Technology for Learning, I am able to impact all stakeholders, and I am making a positive impact in our use of educational technology.